Arojah Theatre Returns with ‘The Wizard of Law’ 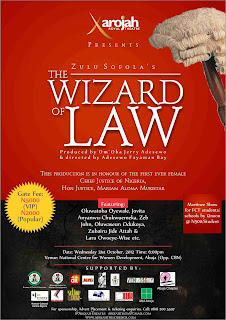 The Abuja based group, Arojah Royal Theatre will on Wednesday 31st October return to the stage with the late Professor Zulu Sofola’s play, ‘The Wizard of the Law’ which is being dedicated to the honour of the first ever Chief Justice of Nigeria, Honourable Justice Mariam Aloma Mukhtar.

The play which will feature the likes of Oyewale Oluwatoba, Jovita Anyanwu-Chukwuemeka, Oluwaseun Odukoya and Zeb John among others; is a satire about an old lawyer, Ramoni who has met with reverse and tries to impress his wife during a festive period by purchasing nine metres of lace material on credit at a time he is penniless. The cloth seller, Rafiu, takes advantage of this opportunity to inflate the prices of clothes in other to make a heavy gain. Unable to pay the debt, Ramoni gets into more trouble and desperately looks for a court case through which he could raise the money to pay his debt.

The Executive Producer of the play, Om’Oba Jerry Adesewo said “We were planning to stage the play to celebrate the International Day of Justice in July, that was to come immediately after our last outing. We missed the timing and so decided to find another relevance for the play. That was when the idea of using the production to commemorate the appointment by the President and Commander-in-Chief of the Federal Republic of Nigeria, of Honourable Justice Mariam Aloma Mukhtar as the first ever CJN because we feel it is a lanmark achievement.” He added that the whole idea is to celebrate the CJN by hosting her, her family, friends and well wishers to an evening of theatrical performances.

Directed by Adesewo Fayaman-Bay, the Abuja presentation of "The Wizard of Law", which is supported by the National Centre for Women Development, African Independent Television, NTA Entertainment and the Bureau of Public Enterprise (BPE) will also starred the likes of Zubairu Jide Atta and Lara Owoeye-Wise.

Arojah Theatre’s last outing was in June 2012, when the group put up a weeklong festival of theatre in honour of the Executive Secretary of the National Institute of rCultural Orientation (NICO), tagged Festival of Barclays Ayakoroma’s Plays (FESTIBAP) which was held at the French Cultural Centre.

“This is the first of a very busy last quarter of the year for us. Apart from the monthly Play Reading Party we organise in collaboration with the Korean Cultural Centre, we have two other outings this year and I think it is good but for us as practitioners and for the theatre loving residents of the nation’s capital”. Jerry Adesewo said, adding that the group will stil stage two plays, Adinoyi Onukaba-Ojo’s ‘Sssooommmaaallliiiyyyaa’ which will be entered as Abuja’s entry for the annual Festival of Nigerian Plays (FESTINA) and Dr. Seyi Adigun’s HIV/AIDS awareness play, ‘Call for me My Osheni to celebrate the World AIDS Day 2012.

"The Wizard of Law" comes up on Wednesday 31st October October, 2012 by 6pm prompt @ the National Centre for Women Development, Abuja with a Matinee for students of FCT schools.