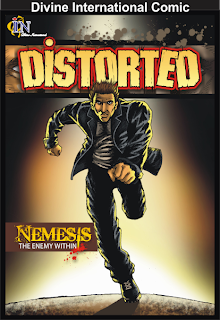 Distorted tells the thrilling story of life's puzzles through a young man eyes - Jasper Alison.   Born to a Nigerian father and an American mother, he is the first child  out of three children. Jasper's life is full of contradictions; he  seeks answers to questions. His life takes a turn for the worst when  his mother dies during the birth of his younger brother. Jasper's father- Otunba Alison turns to politics to feel the vacuum created by his wife's loss. Politics becomes an obsession for him; his children discover different obsessions.

With no parental guidance, life becomes an experiment for the children. Jasper, in his inquisitive nature continually asks- what is the essence of family? Without a response, he loses all sense of belonging to the family which he searched for and found in a cult--the Brotherhood of the Black Star.

He meets George, an extremely cunning friend from a broken home, they become best of friends. The cord of friendship  becomes strained when George starts developing interest in Louise, Jasper's sister. Jasper knew how dangerous his friend was and did not want his sister anywhere near him. However, after much pressure and manipulation, Jasper bows to pressure from George. He helps him woo his sister.
George gang rapes Jasper's sister and dumps her unconscious body in a lagoon on campus. Louise survives the rape episode, but her life is  shattered by deep emotional scars. Jasper avenges the dastard act. But with consequences.  The Brotherhood of the Black Star! It is a taboo in the brotherhood for a member to get even with another member. The consequence? Death.

Jasper finds himself in a battle, not just to save his own life but to save his entire family from being wiped out. A stage is set for a breathtaking battle of wits and survival. Jasper's battle for survival leads him like a endless vicious cycle, into the heart of a conspiracy too distorted to untie.  Distorted is action packed, and can be read by both young and old, as there is something for everyone in its colourful pages.


The comic is distributed across  Nigeria by Magazine Circulation Nigeria Ltd. You can also buy copies  from Terrakulture, Debonair Bookstores and the Hub Media Stores, Palms Shopping Mall, Lagos.