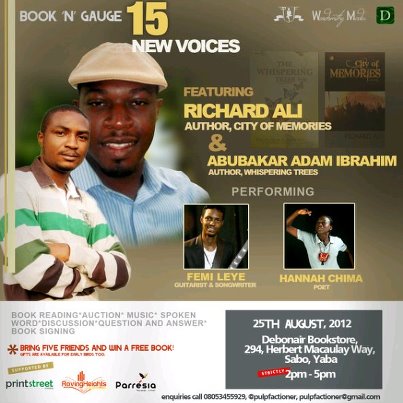 Parresia writers, Abubakar Adam Ibrahim (author of The Whispering Trees) and Richard Ali (author of City of Memories) will be featured in the 15th edition of Book N Guage.

Poet, short story writer and public commentator Bob MajiriOghene will be the major featured  writer at the August 25 edition of the Guest Writer Session, an initiative of the Abuja Writers’ Forum (AWF), which holds at Hamdala Plaza, Plot 23, Jimmy Carter Street, off  Protea Hotel, Asokoro, Abuja. The other writers will be Onyinyechi Nwadinma and Ibrahim Zakama.

Author of Tears for a Birthday (poetry) and Deep Sighs (short stories), Bob MajiriOghene  began expressing his writing flair as a student-columnist with the Nigerian Observer in 1991 with a column that gained rapid popularity called  Acada Gist. He later worked with TELL news magazine first as staff, then as senior writer. He  was  also editorial assistant and columnist with Daily Independent Newspaper, Nigeria. His column identity then was Avant-garde.

MajiriOghene has written numerous literary critiques and was also a thoroughbred SAT/TOEFL/Advanced Level Literature-in-English tutor with a track record of student success in those exams. He has manuscripts, one is SAT/TOEFL Essays: lesson notes, questions & Answers, being considered for publication in the United States of America as an e-book. The other is Secrets of a Diary, a story of love and hate  narrated by a diary.

A graduate of English from the universities of Benin and Lagos,  MajiriOghene was the recipient of two German fellowships organized by the International Institute of Journalism, IIJ of InWent, first in Ghana (Reporting on ECOWAS & its Institutions) and next in Berlin Germany (Environment Reporting) in 2008. He is in the process of undertaking  postgraduate studies.

He runs his own media and publishing agency, Bob MajiriOghene Communications, and works as office manager and editorial consultant with the law firm of Jackson, Kargbo & Associates.   His interests include chess, music, philately, writing, sports.

On the August bill with MajiriOghene will be  Onyinyechi Nwadinma and Ibrahim Zakama. Ms Nwadinma , whose short story, “My Vacation”, is published in the recent anthology of stories, Dreams at Dawn edited by Helon Habila, Tsitisi Dangeremgba and Madelieine Thien and published by Fidelity Bank, organizers of the annual International Creative Writing Worskhop, is  a graduate of University of Jos and intent on making a career in writing.

More information here
Posted by The Bookaholic at 1:30 AM No comments:

Word UP: Poetry is in Town!

We will be having all the A-List Poets in Naija, likes of Sage Hasson, Efe Paul Azino, Plumbline, Olulu, Bob Ekat, Chiedu Ifeozo, Uche Uwadinachi, Atilola, Nini Efem, Enigmatic Olumide and many others.

We will also have Celebrities who will perform poetry on stage. It will be an evening of Poetic Expressions in Words and Sounds.

Posted by The Bookaholic at 1:30 AM 4 comments:

This contest has a Christian slant to it. Interested? Dive in!

11 Corinthians 5 18 -21 “All this is from God, who reconciled us to himself  through Christ and gave us the ministry of RECONCILIATION  that God was reconciling the world to himself in Christ, not counting men’s sins against them. And he has committed to us the message of reconciliation. We are therefore Christ’s ambassadors, as though God were making his appeal through us, We implore you on Christ behalf: be reconciled to God. God made him who had no sin to be sin for us, so that in him we might become the righteousness of God”. (NIV translation)

Why?
By the wondrous mercies of our Lord and Saviour Jesus Christ, on the 5th of September 2012, I   Dr. Abimbola Oyindamola, Odumosu, nee Denloye, will turn 60. How time flies?? I can still remember my 12th Birthday party in Mary Hill Convent School in Ibadan and a lot more!!! I give the Lord thanks, for this journey has been like every journey of life a pathway of hills and valleys but through it all the Lord has given me victory upon  victory and lots of JOY, in my families (Odumosu & Denloye) and career.

At an early stage of my life my mother, Omotunde, Nelly Denloye (Nee Nottidge)  taught me and my siblings the art of forgiveness, by the way she lived her life. She lived a life of continuous forgiveness on a daily basis. I well recall a time when a friend hurt me badly and the friend was having a party and I vouched not to attend and to cut the friend off, my mother’s response is “this friend a Christian?” and I replied in the negative and then, she said why are you expecting her to behave better than she has done, just forgive her, and love her. She taught me to lower my expectations from friends and families and be more ready to forgive and apologise, and move on.  As you guessed, I forgave the friend, bought her a present and attended the party, though grudgingly in obedience to my mother. I can recount countless other stories but will stop here. Her favourite word to us her children in Yoruba is “Iyen lo ma se ti o ma fi jun won lo.” Her charge to us was for us to walk a higher path, to demonstrate that you are above pettiness in life. She taught us to harness the power of hurt, turn it into love and walk a higher level. All my brothers and sisters know exactly what I am talking about. She often reminded me of the likes of Martin Luther King.  My mother loved everybody freely AND above all,  demonstrated  the power OF FORGIVENESS BY FREELY FORGIVEN THE MANY WHO HURT HER AND she taught all of her children  to do the same thing. As such, I have decided to honour  the life she gave me and her other children by sponsoring the following activities on the theme of forgiveness.


Closing Date for submission:  30TH  OF SEPTEMBER 2012.
All entries should be submitted to Syreeta Ufeli by email: syreetastone@yahoo.com

Story:
All the persons whose stories are chosen for display will receive a gift of 100 US dollars each.

Posted by The Bookaholic at 5:49 PM 2 comments:

Invisible Borders Trans-African Photographic Initiative is an art-led initiative, founded in Nigeria in 2009 by passionate Nigerian artists – mostly photographers – with a drive and urge to effect change in the society.  The mission of the Initiative is to tell Africa’s stories, by Africans, through photography and inspiring artistic interventions; to encourage exposure of upcoming African photographers towards art and photography as practiced in other parts of the continent.; to establish a platform that encourages and embraces trans- African artistic relationships within the continent, and to contribute towards the socio-political discourse shaping Africa of the 21st Century.

Route: Lagos (Nigeria) – Lubumbashi (Congo)
After successful completion of the IB 2011 from Lagos to Addis Ababa, the Invisible-Borders team plans to travel from Lagos, Nigeria to Lubumbashi, Congo for the 2012 edition. This year’s trip will feature ten artists from different countries in Africa traveling over 13,000 km within 48 days (through mostly rough terrains) from the 23rd of August to the 9th of October 2012. The trip is anchored to the “Rencontres Picha, the biennale of Arts of Lubumbashi and will be organized in collaboration with its organizers.

The group will make stops of about five to seven days in the capital and important cities of Nigeria, Cameroun, Equatorial Guinea, Gabon, and Congo (Kinshasa and Brazzaville) to create artistic works in collaboration with the indigenous artists in the cities, while networking within the art community. However intermediary stop will be made in towns between cities according to the on-ground reality of the trip.

Participants of Invisible Borders are dedicated to creating works, which portray the dynamism, richness as well as contradictions of the various modes of existence of the African people. In doing this, they reject a simplified notion of Africa nor a tidy definition of it, but instead hopes to create an archive of works which “complicates” the depiction of contemporary Africa, one which sees the continent as work-in-progress, rather than a foregone conclusion. However, this will not deter from exploring themes centered on socio-political discourses prevalent in the continent such as women’s right; the role of China and other economic world powers in the shaping of the African economy, nature and wildlife preservation/sustainability, as well as the Infrastructural boom. They will equally explore fashion and music and their role in creating Trans- African relations. Artists are allowed to work from a more personal angle as well as create conceptual photographic, video and textual works. The aim is to tackle diverse but presently relevant issues as seen individually by each of the ten artists involved in the project. In 2013, a book will be published which will be a compilation of the four editions from 2009 – 2012.

You can read more about the project and the trip on their website.

Posted by The Bookaholic at 4:34 PM No comments: