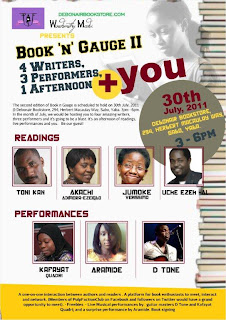 Celebrating the Super Sun album launch with live performances by the man of the moment, BEZ. Featuring Keyboardist and singer, Kaline Akinkugbe and guitarist Stan Iyke. Event is by Invitation Only. Please call or sms 0703 403 0683 TO RSVP and get on the guest list! Loads of surprises and goodies in store for guests on this special evening. Bez is profiled in Next Newspapers.
Venue: The Life House,
33 Sinari Daranijo Street,
Off Younis Bashorun Street, Off Ajose Adeogun Street, VI (opp. Suzy Q CLUB)
Lagos, Nigeria
Time: 7pm.
Date: July 29
Posted by The Bookaholic at 2:11 PM 1 comment: 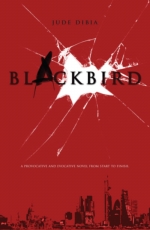 ...Here's an opportunity to fly on the wings of creativity. This competition is sponsored by Guerrilla Basement, Beautiful Wings blog, and Obinna Udenwe, author of The Dancing Bird.  And yes, Bookaholic Blog is a sponsor as well. Well, we would give a copy of Stephen Kings "On Writing" to one of the winning writers. Just our way of putting our books where our mouths are :)
Creative Wings is launching its first ever short story competition, with the aim of encouraging budding African writers. The inaugural contest is now open. Deadline for submission is AUGUST 15, 2011.
Rules
Prizes
Start writing!
Posted by The Bookaholic at 1:20 AM No comments: 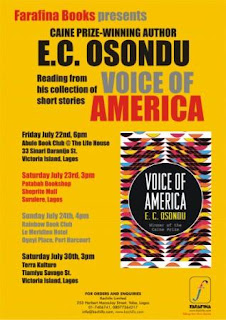 Sometime in 2009, we interviewed EC Osondu, after the interview, he went on to win the Caine Prize for that year. Not to mean that the interview made him win of course, it was just our way of saying go for it! And sure, he went for it!
Here we are in 2011, his collection of short stories, Voice of America has been published by Farafina. He would be reading in various parts of the country in July. Here's a breakdown of events. Catch him around town and say you are a Bookaholic Blog fan ;)
Lagos
Abule-Book Club V.I on the 22nd; Patabah bookstore  Shoprite mall, Surulere on the 23rd  and Terrakulture V.I on the 30th.
Port-Harcourt
Rainbow book club, Le Meridian hotel. on Sunday 24th.
And yes, there would be free Farafina books for grabs. Go listen to some voices out of America in Nigeria!
Posted by The Bookaholic at 1:19 PM 3 comments:

On Wednesday 13th July 2011, Nigeria's only and one of Africa's Nobel Prize Winnera for Literature, dramatist, poet, novelist and social crusader, Professor Oluwole Soyinka will be 77.

In view of these, we have dedicated the July edition of Arojah Royal Theatre's monthly PLAY READING PARTY for the celebration of Kongi's 77th birthday.

The celebration, organised in collaboration with the National Association of Nigerian Theatre Arts Practitioners (NANTAP), Abuja Chapter will feature readings from Soyinka's plays and poems, theme talks, and a 'My Favourite Wole Soyinka Book.

A brief talk on Wole Soyinka: 'The Man, His Writings and the Society' will be delivered by a seasoned theatre practitioner. 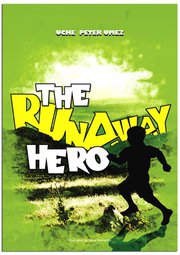