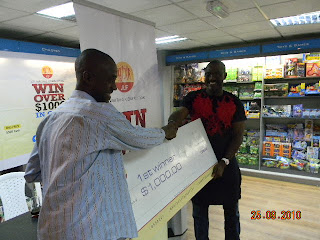 HENRY CHUKWUEMEKA ONYEMA WINS THE INAUGURAL JLF WRITING COMPETITION
Henry Chukwuemeka Onyema, teacher by day and writer by night, has emerged the winner of the inaugural JLF writing competition. He won for his short story, “Can I Trust You With My Life,” an adaptation of the biblical story of Samson and Delilah, and smiled home with his $1,000 prize money.
Announcing the winners, Toni Kan, one of the judges said Henry’s story scored 336 out of 400 points and was chosen for “his beautiful prose, precise diction, exciting action and ability to draw character portraits that were almost real to life.
The topical setting of the story in present day Gaza with the Isreali blockade and daily skirmishes imbued the story with an immediacy that was impressive.” Other judges included copywriter and brand specialist, Akpo Daniyan, author of “I have an idea”; Editor and Beauty therapist, Lola Maja and owner of Manna books, Mrs Agusto.
The runners-up were Agbor Fabby for “Bethany and the General,”
an adaptation of the King David, Uriah and Beersheba love triangle and debacle set in Washignton DC with the war in Iraq as backdrop. He left the event with his $500 prize money, and Funmi Ogunlusi for her short story, “Call Me D” which is also an adaptation of the Story of Samson And Delilah set in the very modern locale of an advertising agency. She was the third prize winner of $250.
In his comments at the event, Tonio Okojevoh, founder of JLF and organizer of the competition thanked the writers and judges for taking part and promised that it would be an annual event “to discover hidden talents and provide them with a platform on which to realize their dreams.”
Other highly recommended writers and stories were Onyinye Ihezukwu for “And now that I should smile;” Janet Afegbua for “The Aftermath” and Best Okoduwa for “The Achiever.”
Posted by The Bookaholic at 6:29 PM