Nigeria was 51 as an independent country, October 1, 2011. Nigeria’s independence is one that is pregnant with many questions. How independent is the country? This question is one that is also asked in literature today; how independent is Nigerian literature? When it comes to themes, forms and awards? Book N Gauge V will feature conversations with two writers, Sam Omatseye and Chuma Nwokolo and performers Efe Paul Azino  and Jeffrey Jaiyeola aka Plumbline. 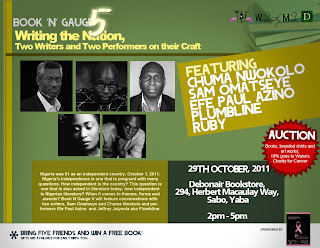 Writers & Performers
Chuma Nwokolo, lawyer, writer and the publisher of African Writing magazine. He is author of the poetry collection Memories of Stone, the serial Tales by Conversation, and many novels, including Diaries of a Dead African, the Pulpfaction Club Book of the Month for October. He was writer-in-residence at the Ashmolean Museum in Oxford. Chuma’s writing has been termed as funny yet witty.
Sam Omatseye, poet and writer and frontline columnist with The Nation newspaper. His journey into journalism started in 1987 as reporter with Newswatch. He has won several awards, including the inaugural winner of the Gordon Fisher Fellowship for journalists in the British Commonwealth (1991). He also won the Alfred Friendly Press fellowship (1997). He won the Diamond Award for Media Excellence (2010) and Nigeria Media Merit Award for columnist of the year (2011).
His latest works ‘Crocodile Girl'; ‘Lion Wind and Other Poems' and ‘In Touch', were published in 2011.
Efe Paul Azino got a rousing ovation after he thrilled the crowd at the last edition of the Book N Gauge. Regarded as one of Nigeria’s leading Spoken Word Poets, Efe Paul has been a headline performer in many performance poetry venues, including Anthill 2.0 and Taruwa.  Efe has delivered Spoken Word Poetry locally and internationally.  Reflecting the suffering in African societies and the hope that keeps them going; Efe Paul’s poems cut across class, social and religious boundaries.  Efe Paul is at once entertaining and thought-provoking; he leads a generation of poets in lifting poetry off the printed page, out of the shadows of academia and placing it right before the audience.
Plumbline studied as a Geo-scientist, rather than digging oil pipes; he “mines” words. Influenced by poets like the late Mamman Vatsa and the late Ken Saro Wiwa, the songwriter and spoken word artist wrote poetry from his secondary school days.  He performs Spoken Word Poetry at most Lagos Events like Wordslam, Anthill, Taruwa and hosts Chill and Relax. His words dash straight through the heart of the audience and leaving them with thoughts, little mementos to take home.
Ruby always knew she was going to sing. Her name is Ngohide Ruby Ann Gyanggyang; everyone calls her Ruby. Her father introduced her to soul music, to the world of Aretha Franklin, Miriam Makeba, Onyeka Onwenu, Marvin Gaye, Whitney Houston, Yolanda Adams and Jill Scott. In Jos, she met M.I and Jesse Jagz, who were then both starting out in music. Then Loopy Music started as a group of young people making good music. Together, they recorded and organised popular jam sessions in Jos and Abuja. Ruby's music tells stories of pain, passion, longing and love, of the mystery of life. When she is not making music with her 4-octave range voice, Ruby focuses on providing platforms for “musical expression” for female artistes such as her Diva's Unplugged.
Auction Session: There will be an auction session. What do you get? Latest books that you can only find online. Hot CDs that are yet to be on the streets. The lovely purple Pulpfaction Club T-Shirt. This month, we will support Wana Udobang’s fund raising efforts with 1k for Cancer. 10 percentage of the money off the auction goes towards giving cancer patients a better life.
There are prizes to be won for those who buy our Book of the Month Diaries of a Dead African before the event. To order, call:
Also:
DATE:  29th October, 2011
TIME: STRICTLY 2pm – 5pm
VENUE: Debonair Bookstore, 294, Herbert Macaulay Way, Sabo, Yaba.
Remember: Bring five friends and win a free book! Gifts are available for early birds too.
Posted by The Bookaholic at 1:26 AM