Sylva Nze Ifedigbo on A Heart to Mend 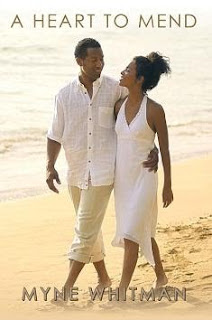 Nigerians and indeed Africans are not known for romance writing. The reason can be attributed to the sense of morality (real or apparent) that relegates issues surrounding romance to the secrecy of bedrooms thus treating sex as a topic discussed only in hushed tones like some sacred ritual. We generally carry on like we don’t do sex yet we have HIV, or we don’t fall in love yet we have marriages.

Myne Whitman’s book, A Heart to Mend, makes a bold statement to the contrary. It shows that we do not only fall in love nor marry for love, love also conquers situations that could have ordinarily been a bit difficult to shoulder alone. A Heart to Mend comes as a fresh breath of air. It chronicles the journey of Gladys Eborah, a young female  graduate from Enugu, South Eastern Nigeria to the commercial city of Lagos first to find a job and - in the process- love and ultimately marriage. Typical romance style, this journey is not rosy, but filled with so much turbulence which raises the suspense giving the reader a deeper satisfaction for the also typical ‘happy-ever-after’ ending.

Gladys doesn’t share the spotlight alone however. Employing a double barreled lead character description approach, the author also brings the reader into Edward Bestman's life, young unmarried head of a business empire. Edward and Gladys meet in the very first chapter of the book but it takes longer for Edward to overcome his mistrust for people and profess his love…one which he felt since very first day.

For Nigerian readers, there is plenty to like in the book.  It is rich with very familiar words, places and things which they can easily relate with. We have for example the popular Peace Mass Transit which many Enugu residents know. We have Zennon oil, Terra Kulture, Tuface, Sound Sultan, Securities and Exchange Commission, etc. The language is simple but the description languid in some instances. It goes on and on sluggishly, seemingly not in a hurry to get to a climax.

For people who find it difficult to read books without conversations, A Heart to Mend presents itself as a good New Year gift but then some of the conversation are drab. A novice in the complex workings of the Stock Exchange might find this book a handy guide as the author engages the reader with concepts only those well schooled in that field would understand. I admire however how Whitman introduces these concepts in conversations which help the reader appreciate what is said rather than foisting it down the readers in some kind of tutorial format.

The absurdities and sharp practices that exist in Nigerian business climes are well captured. Mr. Odutose has developed a dubious way of helping companies get richer. He is persistent in selling his idea even when Edward is adamant. Odutose finally finds a listening ear in Chief Okrika who ironically sets out to use the idea against Edward Bestman. It is uplifting to note however that Edward Bestman's persistent refusal to buy into Odutose’s plan shows there are still credible Nigerian businessmen and women--a badly needed reminder these times Nigeria seems popular globally for only the wrong reasons.

There are a couple of downs for the book. The reasons why Aunt Isioma abandoned her relatives for so long a time does not sound convincing, neither did the author do very well in explaining why Chief Okrika and wife should show up suddenly after so many years and begin to witch-hunt Edward Bestman.  Gladys' initial reactions to Aunt Isioma which were intended to portray her existing annoyance for Aunt Isioma’s unexplained wrong treatment of her relatives seemed quite childish. But then, this is fiction and I guess the author has the right to the soul of her story.

Nigerian readers can now satisfy their yearning for well written, homegrown romance stories while the foreign readers can treat themselves to a different kind of romance--one made in the highly boisterous commercial Lagos. A Heart to Mend is the author's first offering, an impressive one which shows that the author should be watched for even richer outings.

Visit Myne Whitman's blog here. Get copies of the book here and here.

Posted by The Bookaholic at 4:33 AM