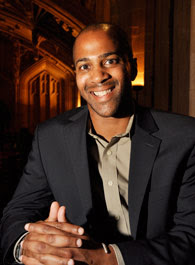 Sierra Leone's Olufemi Terry has won the 2010 Caine Prize for African Writing, described as Africa's leading literary award, for 'Stickfighting Days' from Chimurenga vol 12/13, Cape Town. The Chair of Judges, The Economist's Literary Editor Fiammetta Rocco, announced Olufemi as the winner of the £10,000 prize at a dinner held this evening (Monday 5 July) at the Bodleian Library in Oxford.

Fiammetta Rocco said "ambitious, brave and hugely imaginative, Olufemi Terry's 'Stickfighting Days' presents a heroic culture that is Homeric in its scale and conception. The execution of this story is so tight and the presentation so cinematic, it confirms Olufemi Terry as a talent with an enormous future."

Born in Sierra Leone to a Sierra Leonean father and an Antillean mother, Terry grew up in Nigeria, the UK and Cote d'Ivoire, studied at the New York University (earning a B.A. in Political Science in 1994 and a Masters degree in Interactive Telecommunications in 2002) and has lived in Kenya, Somalia and Uganda, working as a journalist and editor with The Wall Street Journal, The Economist, the World Health Organisation, and the World Bank. In 2008 he earned an MA in Creative Writing from the University of Cape Town. He now lives in Cape Town and is completing work on his first novel.

The Caine Prize, established in 2000, celebrates short stories of between 3,000 and 10,000 words by African writers, and is one of the continent's most prestigious literary awards. Its patrons are the three African winners of the Nobel Prize for Literature, as well as Chinua Achebe.
Posted by The Bookaholic at 3:25 AM