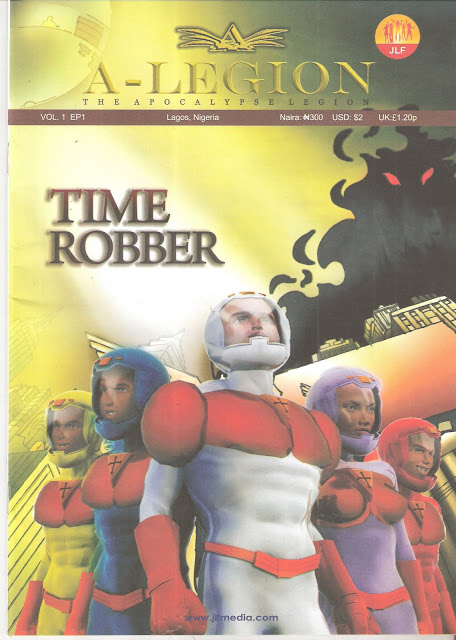 A new comics from JLF: A Legion 'Time Robber'
The battle is about Luc, trying to gain control of the hearts of men. He has invested in new age technology to pursue his objectives. He personally handpicks Abaddon to handle his sinister operations. The freeminders, creators of the Dermits, are led by the powerful Professor Murdoch. The freeminder’s answer to Abaddon is Baranta, the brain child of Professor Murdoch. They are all involved in Luc’s plans to gain control of the hearts of men. Luc uses the divide and rule tactics on his dark hordes. The whole world is oblivious of Luc’s actual plans. Everybody, except the Apocalypse Legion. The A-Legion is made up of five regular neighborhood kids: Jammy, Xggzy, Manny, Nakky and Zaggy, who live and operate in the spirit of five angels chosen by Son Of Man (SOM) who is God’s last stand against Luc. SOM buzzes the A-Legion on their video watches sometimes. This is one of the ways they get assigned their mission.
As the story begins………The Dermits new age techies are in town, and are being used by Professor Murdoch to renew his leadership of the freeminders, and to harass the citizenry. But watching as always is the A-Legion, ever ready to rise to the occasion.