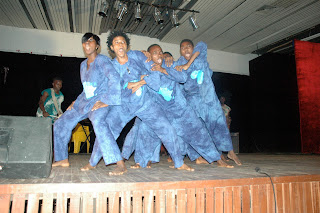 On the first day in the month of June 1996 a group of young people came together. They met in the seating room of a flat occupied by the mother of one of them in the house of a foremost Nigerian musician King Sunny Ade. His son Adekunle Adegeye was one of them. He was to become the first choreographer of the group named the Crown Troupe, a repertory group of total theatre makers. These young people shared a thing in common-passion for performance.

Over the years, the group has metamorphosed into a socially conscious one from entertainers to commentators. Located in Bariga, a place noted for notoriety amongst others things, the group has continuously created a platform of expression through the arts for young people who otherwise might be tempted to channel their youthful energy to less profitable vocations.

Now in our 16th year of creative engagements, we intend to celebrate the anniversary in our traditional fashion of a mixed menu of performances at different locations in Lagos culminating in a grand finale at the National Theatre on Friday, the 29th of June 2012. We also intend to tour some Nigerian Universities with two new creations before going for an international youth theatre festival for which we have been selected and slated to perform in Manchester.

Contacting The World is a biennial youth theatre festival organized by Contact Theatre based in Manchester and Crown Troupe has been invited to participate and represent Nigeria at the festival in July 2012. We have been twinned with another U.K Based Theatre Company, Boundless Productions, Manchester. There have been exchanges between our two companies, with a member of Crown Troupe visiting Boundless Productions in March and the visit reciprocrated by one of them (Cat Dowling) visiting us in April. Through the visits, we were able to see each other in our environment, observe our theatre making techniques as well as meet the constituent artists of the groups. Contacting The World, a trailblazing Youth Theatre Festival has been an inspiring platform for young theatre makers to meet, learn, share creative experiences and network in an atmospere of fun.

Schools to be visited include:
Obafemi Awolowo University, Ife, Osun State.
University of Ibadan, Ibadan, Oyo State.
Posted by The Bookaholic at 1:00 AM