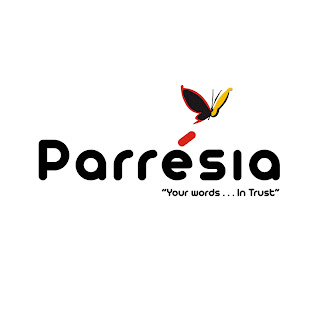 Your manuscript has started gathering dust? It's not time to give up. Oh well, not yet, not until you try this new Nigeria based publishing house. Introducing Paressia.

Parrésia Publishers Limited with its two imprints, Parrésia Publishers and Black Palms Publishers, enters the Nigerian market at a crucial time when publishing is at best a risky investment. Only two serious publishing firms have been set up since the return of democracy in 1999 and while these have published very important authors who have gone on to win international prizes and awards, the Commonwealth Prize, the Orange and the Soyinka for example, they have not catered to talent discovery—that critical, replenishing and uncertain publishing demographic.

Set up by long time literary aficionados Richard Ali and Azafi Omoluabi-Ogosi to publish especially new voices, Parrésia Publishers Ltd has been causing ripples since entering the market in January 2012. Richard, apart from being Editor-in-Chief of Sentinel Nigeria Magazine and Publicity Secretary of the Association of Nigerian Authors, is best known for his 2010 criticisms of Nigerian literature written in Northern Nigeria. Azafi, who holds an MA in International Relations, was an editor with Farafina [Kachifo Press Ltd’s literary division] for years and has run a community library and a most recently a literary agency, providing content for several national magazines.  Miss Rose Kahendy is the third part of the Parrésia triangle—she is the principal editor. Rose is a writer and translator of East African origin who just successfully defended her doctoral dissertation at the University of Iowa.

The company’s flagship imprint, Parresia Publishers, is a traditional publishing setup that came on stream with its signing on of journalist Abubakar Adam Ibrahim’s debut short stories “The Whispering Trees” at a ceremony in Jos where the author signed his publishing contract and received a sign-on advance of N100,000 only. This was followed soon after by the signing on of Saraba Magazine co-publisher Emmanuel Iduma, for his novella “Farad”, at a public ceremony at Debonair Bookshop, Lagos, where Emmanuel received his sign-on advance of N100,000. The reality of an advance on sales made out to a writer has not been seen in Nigerian publishing in over 25 years yet the very philosophy behind the company’s Parresia Publishers imprint is that talented new writers especially need to have their confidence boosted and their effort rewarded—hence a financial advance.

The Black Palms imprint is a specialized publishing service innovatively designed for authors who want greater control over their work with or without a contract. Black Palms Publishers contributes its editorial competence and the assured quality of production to a writer’s manuscript while he bears the financial and post-production responsibility.The unique selling point of the Black Palms imprint is however its variable contract system, the Black Palms Marketing System, under which the publisher can assume control of such critical activities as distribution, marketing and accounting services—for agreed on percentages off the optimum cover price arrived at after a careful market analysis. A key distinction between publishing with Black Palms and publishing with the Parrésia imprint is that the first is an all-genres service while Parrésia Publishers is only interested in genre fiction, broadly defined.

General enquiries and submissions can be sent to parrésia@parresia.com while specific questions should be addressed to the Managing Editor azafi@parresia.com.ng or to the Chief Operating Officer at richard.ali@parresia.com.ng

In the month of May, we will feature excerpts from Paressia's titles, and interviews with the new authors. Keep your fingers crossed.

Posted by The Bookaholic at 2:00 AM