BLAST FROM THE PAST: Peter Abrahams 'Tell Freedom' 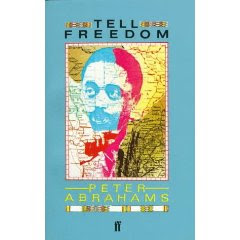 Literature and the society cannot be divorced from each other; the society influences literary works which in turn reflect, refract and more often than not, try to correct the vices in the society. Literary works that are rooted in the apartheid South African society usually reflect the socio-political realities present then; Peter Abrahams’ Tell Freedom is not left out.

This is not just an ordinary book; it is, in a way the autobiography of the writer, a kind of memoir that casts deep glances at the effects of social fascism on his life. It tells the story of his life from childhood to adulthood-from the slums of Johannesburg to the country around it and finally to the England. He relates how he won education against all odds, and his journey on the road to becoming a writer. This is the immediate background from which the reader gets a peep into the lives of South Africans during the apartheid.

The novel is divided into three books (sections). Book one revolves around the South African experience of the boy child: Peter Abrahams. He was born to impoverished parents of mixed nationality: his father is an Ethiopian and his mother, a Coloured South African. From here, he gives a peep into the configuration of South Africa as a rainbow society, melting pot of Indians, Black Zulus, Boers, Whites, and Coloureds, among others. His colour affected his education, acceptability in the society, his humanity.

Book two focuses on the effects of education on him, it awakened his consciousness, politically and literarily. He observed that everything good he longed for was labeled in capitals:

RESERVED FOR WHITES ONLY.
The familiar mood that awaits the sensitive young who are poor and dispossessed is a mood of sharp and painful inferiority, of violently angry tensions, of desperate and overwhelming longings… that mood took possession of me. My three books fed it… (Page 164)

These signs increased the struggle for existence. He was a ‘boy’ for the Whites in the market, where he had an encounter with a Red Head who was a particularly nice woman. He later got a job that almost sucked life out of him in a hotel. There he met a black man named Jim who gives him a peep into the world of passes. There were different kinds of passes: the trek, identification, six-day special, monthly, traveling. All these passes served different purposes but one major one: a restriction to the movement and activities of Blacks. His years at the Bantu Men’s Social Center are remarkable; he was baptized into the world of literature and activism as he read the works of Negroes like W.E Dubois, Weldon Johnson, etc. The content of their works made him remark:

The novel, although with stints of the Marxian philosophy, is written in the critical realist mode. It presents the persona and the realities around him without any revolutionary attempt to change it. The novel is equally subtle in its engagement of racism. This is also seen in Athol Fugard’s Sizwe Bansi is Dead. The Blacks faced the apartheid system from beneath a mask and pretended as if they are fools for the Whites to ride on. This is a medium of expressing the self through the serf. Peter Abrahams finally sets to discover an existence outside racism:

‘Perhaps life had a meaning that transcended race and colour. If it had, I could not find it in South Africa. Also there was the need to write, to tell freedom, and for this, I needed to be personally free… (pg. 311)

Consequently, the novel was born out of his commitment to his society: to express the inhuman inequality based on colour.

The issues in this novel arouse questions in one’s mind: how civilized is a civilization hinged on racism? Does the colour of the skin truly judge the content of one’s character? Is racism dead in the world or has it advanced into new forms? The answers to these questions are resident in the minds of all humans: the oppressor and the oppressed.

Ebuntemi
Posted by The Bookaholic at 3:42 PM