The Darker Side of Lagos... 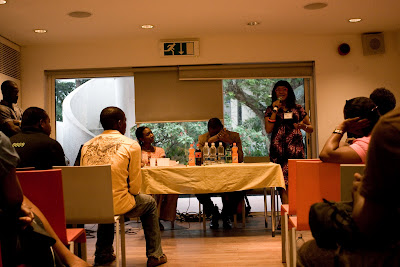 I saw and heard Sefi Atta read from her two new books: Swallow and Lawless and other Stories. She read alongside Toni Kan, writer and author of Night of the Creaking Bed. The event which held at British Council was organised by Farafina. It was scheduled to start at 5pm but started rather late around some minutes to six, this 'African-time lateness image' was however redeemed as the event ended when it ought to and the time I spent listening to these writers was not wasted.
The event opened with Sefi reading from her collection of short stories Lawless and other Stories, a story about a business transaction between a female drug-trafficker and her 'boss'. Though she needs money for survival, she refuses to bring her son into this business eventhough using him be the easiest option. The little she read from the story showed that the economic situation in the country swallows up our values and plunges people deep into pits that they never planned getting into.

Toni Kan also read from his collection. The audience asked questions, most of which focused on their writing, influences and backgrounds. Their responses introduced us into their unique world as writers and the role Lagos plays in their writing.

Toni Kan introduces the next session of the reading by commenting on Sefi Atta's Swallow, he said that the novel has aroused controversies in reviews. Sefi took the mic with a word for her critics: 'they should work more on the crap that they write...' Permit me but this reminds me of Sheri, a character in Everything Good will Come...

She proceeds to read from Swallow, a scene filled with emotions and suspense. We are introduced to the world of Mrs.Durojaiye, a character in the novel that almost goes crazy because it is feared that her son lies dead in a caved-in soakaway. For me, this is representative of Lagosians, it was so sure that the boy would be dead yet they kept stirring with a stick-Lagosians know that Lagos eats up their humanity, yet they live consciously with the hope of a better tommorow.

The writers responded to another round of questions from their audience rather intelligently. One of the things I took with me from the reading was about the making of a writer: sometimes you as a writer can't really determine where a work ends because some stories write themselves. According to Toni Kan, they hold you by the neck and literally say 'oya begin to write'. Sefi Atta, on the other hand is a committed writer that contributes hours to her craft everyday. Writing is not easy, but believe me, it is worth it.

What's next for the writers? In response to this, Sefi calls her first three books the experimental phase of her writing, she is working on more novels. Toni Kan, on the other hand shows that he is a 'voracious' writer as he has a collection of poetry and another novel ready to be published.

What else can we wish these writers?
May they continually itch to write...and that itch will not be cured.
Posted by The Bookaholic at 4:50 PM