"I Need to See Africa in The Future"--Nnedi Okorafor 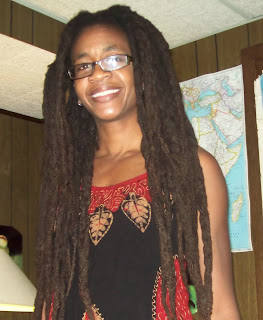 Who is Nnedi Okorafor?

Nnedi Okorafor is a biological construct fused from the DNA of history’s and the future’s greatest witches and literary despots.

How and when did you develop the love for stories?

I loved stories even before I could read. I was born with a very big active imagination- I could do anything, see anything, make anything happen. Whenever I think back to my early childhood, it’s impossible to differentiate the magical stuff I made up in my head from the "real" stuff. On top of this, my father  who was a heart surgeon told tons of stories, and he told them really well with drama, suspense, characters, setting, and sensory details in place.

How does your upbringing affect your writing?

Despite my dealings with racism and many other “isms”, I had a very very happy childhood. And I think that “happiness” often comes out in my fiction. My father was obsessed with understanding how things worked. He made even the mundane (like a door knob) exciting by showing you how it worked. He loved science, math and animals and he moved through the world with a constant sense of wonder, even as he got older. I see in the same way and that comes out in my work too, especially when I ":world build". My mother has a PhD in health administration, is a registered nurse, midwife and a thousand other things. She’s brilliant and very strong. She taught me what it is to BE a feminist as opposed to having to proclaim it. And she was made the strong woman she is by her mother AND father.  Important lessons. On top of this, my father adored her strength and smarts, as opposed to feeling threatened by it. Another crucial lesson. I deal with issues of gender a lot in my work and the complexity of it. It all comes from my upbringing.

What was the first story you wrote about?

The first story I wrote was a short story titled “The House of Deformities”. It was set in Nigeria and based on something that really happened to my two sisters and me when we were kids. It involved bulldog puppies, a wizened old woman with a cleaver, fly-covered meat, vultures and pink ducklings (yep, all this was true). I added a deep black hole full of demons…to flesh out the story. So, from the start my stories were speculative. It’s the way I see the world.

What informs your fascination with Science Fiction?

Now you do you mean science fiction or fantasy? Those are two different things. Science fiction is when the strange things in the story happen because of science. SF involves things like time machines, robotics, nanotechnology, aliens, cyborgs, etc. Advanced technology and science. Fantasy is when the strange things that happen are due to magic, the mystical, the unexplained. Fantasy involves things like fairies, witches, ghosts, magical systems, etc.  For me, sf and fantasy are practically one of the same. As I said, I tend to see the world as a magical place. Nature is amazing. It’s earth’s greatest scientist. Also, I NEED to see Africa in the future. Too often, when I read about Africa in American fiction, it's an Africa of the past. It was often the place African Americans were forced to leave. Or it was “the pre-colonial place”. These representations didn’t fit well with my own experience of Nigeria. To me, Nigeria was very futuristic, and in a bizarre way. No plumbing in the house but you’ve got cell phones, for example. I was fascinated by that and no one was writing about it. Technology is consumed by and affects Africans in a unique way. Then I just took it further in my work and that’s when my fiction became science fiction.

What do you call your kind of writing? Unique.

You’ve won a couple of awards, how do you feel? I feel great. It’s always nice to be recognized.

Best advice you got as a writer

Keep writing. Writers write. And check your ego at the door. Few people are born awesome writers. And no great work is created 100 percent alone. The best writers are writers who know how to listen to criticism, feedback and direction when necessary.

How do you manage to write science fiction with images drawn from Nigerian folk and superstitious culture without playing to the stereotypes that give ‘us’ a bad image in the West? Simple answer: I’m Nigerian and I have a deep unconditional love for Nigeria. Some of the worst things in my life have happened to me in Nigeria. I have experienced true terror while there, terror that probably took days from my life. So don’t think I have some rosy view of the country. But some of the most wonderful things in my life have happened there, too. Most of my family is there.  And it’s beautiful. My parents have been taking my siblings and I back there since we were young. We also make the effort to stay connected, by any means necessary. I’m doing the same with my six year old daughter. She’s been back twice already.

Mind you, I’m very independent and many Igbo traditions just turn my stomach. You won’t see me adhering to certain traditions. And I’m not afraid to say that I won’t. This is me and always will be me. All the kidnappings, oil wars, fraud, theft, corrupt government shenanigans, family issues, among others will not keep me away. I always go back.  All these come out in my work. This is why I don’t fall into the stereotypes. I’m sincere.

Hmm, that’s a hard one. I did see someone say on his blog say that he wouldn’t read my two novels because they didn’t have any white people in it. Idiot.

Tell us more about Akata the Witch

Akata Witch is my third young adult novel (my forthcoming adult novel is titled Who Fears Death is scheduled for release in June 2010). It’s set in present day Nigeria. The main character is a 12 year old girl who confuses people. Her name is Sunny. She was born in New York to two Nigerian immigrant parents. When she was nine, she and her family moved back to Nigeria. She also happens to be albino. So she’s an American by birth and a Nigerian by blood, living in Nigeria, with skin and hair lighter than Caucasian skin but sensitive to the sun. Sunny's character is actually based on a family friend. One of Sunny’s favorite things to do is to stare into candles. One day while staring into a candle she witnesses something terrible. This turns out to be the first step into an adventure that changes her life. This novel’s got real masquerades, a wrestling match to match no other, a most excellent soccer match, the real reason for the face on Zuma Rock, shape shifters, and some serious juju.

You are Obama for a day, what will you do?

Hop on Air Force One and make a discreet visit to Nigeria to verbally brow beat the top government officials into treating their country with honor, respect and patriotism. Then later that day, I’d make a surprise visit to a few busy markets in Lagos, Jos, Abuja, Owerri, and yes Port Harcourt. Of course, my security would be air-tight.

What part of the process of writing do you enjoy most?

Editing. The “genesis” process is tough for me. This is when you create the initial story. But once I have a draft, ugly as it always is, I enjoy the polishing of it. I’ll edit a draft 15 to 20 times.

What book are you reading at the moment?

I’m always reading something. I just finished the latest installment in the Aya graphic novel series by Ivory Coast writer Marguerite Abouet and French illustrator Clement Oubrerie. This is an excellent series that shows Africa in a realistic and positive light for once.  Right now I’m rereading a science fiction novel set in South Africa called Otherland by American novelist Tad Williams. The main characters are Irene Sulaweyo and a Bushmen named !Xabbu (if you’re still sore about District 9, this novel is good therapy).I’m also reading Song of Lawino and Song of Ocol by Ugandan writer Okot p’Bitek.

Now Ginen is a land beautifully described that one feels it truly exists. How do you make your reader believe the reality of the world you create in your works? Ginen totally exists. It’s real place to me. Because I feel it’s real, I write about it as such. All my stories are real to me. If I didn’t believe they were real, how I could write them well?

Who are the writers that influence you?

Any plans to have your stories on the screen?

I always have plans. There are interests and possibilities. I have written a screenplay for Nollywood’s “ogbanje” director Tchidi Chikere. Right now it’s titled, “Wrapped in Magic”. He plans to shoot it soon. There was film interest in The Shadow Speaker but the production company, though they loved the book, found it too complex for film. That makes me laugh. Lastly, right now there are multiple film production companies interested in my forthcoming adult novel, Who Fears Death. We’ll see.

What do you think of the literary landscape in Nigeria?

Any plans to get more of your books published in Nigeria?

Zahrah the Windseeker is already published in Nigeria by Kachifo Ltd. They also own the African rights to The Shadow Speaker. Hopefully they’ll be able to also bring Akata Witch and Who Fears Death to Nigeria. Having my work available in Nigeria is extremely important to me.

What does it mean to be a writer?

It means solitude, which often becomes loneliness. It means hard work with little initial reward. Discipline. Distorted nakedness. And it means that you have a place to channel your fury and a place to create your dreams.