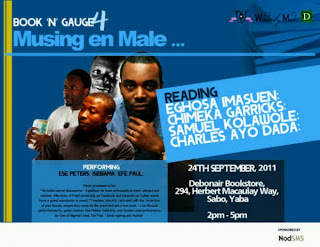 In the month of September, PulpFaction Book Club would be hosting you to four emerging voices on the Nigerian literary scene. There will also be two soul artistes and a spoken word poet and you don’t want to miss this. It’s an afternoon of readings, live performances and YOU.  Be our guest! And yes, bring four friends and win a free book!

Chimeka Garricks: Author of PulpFaction Book Club’s September Book of the Month, is a lawyer by day, a writer at night and a football fanatic at weekends. Tomorrow Died Yesterday is his first published novel. He has read the book at different literary gatherings including Rainbow Book Club and Infusion. His debut novel was featured at the 2011 Garden City Literary Festival. Chimeka Garricks lives with his wife, Biyai, in Port Harcourt, Nigeria.
Eghosa Imaseun: Born on the 19th of May in Ibadan, 1976, Eghosa is an alumnus of the inaugural Adichie-Wainaina-Fidelity-Bank Creative Writing Workshop that held in Ikoyi in 2007. He grew up in the oil city of Warri. His first novel, To Saint Patrick, an Alternate History look at Nigeria from the Civil War onwards, was published to critical acclaim by the Farafina Imprint of Kachifo Ltd, Lagos, in 2008. His second novel, Fine Boys, a look at Nigeria's post-Biafra generation through the prism of the IMF conditionalities of the 1990s, is expected from Farafina in late November 2011. He lives in Benin City with his wife and twin sons. He is also a medical doctor.
Samuel Kolawole: His fiction has appeared in Jungle Jim, Eastownfiction, Translitmag, Superstition review, Sentinel literary Quarterly, amongst others. His stories are forthcoming in ISFN anthology, an American-based imprint where his writing life will also be showcased. A recipient of the Reading Bridges fellowship, Samuel lives in Ibadan, southwest Nigeria, where he has begun work on his novel Olivia of Hustle House. He blogs regularly at Samuelkolawole.wordpress.com.
Charles Ayo Dada: A poet, playwright, prose writer and publisher, Charles Ayo Dada was born in Brussels Belgium, in 1971. He had an opportunity of an early exposure to the culture of the Arabs, the Europeans and the Americans.His collection of poem, the Ghost of Zina was nominated for The Pat Utomi Literary Award. Excerpts of the work have been published in several international journals and can be found online at numerous websites. He has been invited to several universities (where his book is studied) to speak on his work and has had The Ghost of Zina performed at the department of English, faculty of Arts, at The University of Lagos. ‘The King’s Clarion Call’ is his first stage play..
Performances
ESE PETERS: Ese has a knack for making beautiful music. A self-taught guitar player, He started out as a solo performer after graduating from the university in 2008 the Alternative Rock/Soul genre. A young man who sings from his heart, Ese carefully crafts his songs which come from his experiences and a wealth of influences, citing John Mayer as a  major reason why he decided to pursue music as a career, Ese  puts an interesting spin on guitar-driven pop music.
.
ISEBIAMA: A product of the MUSON Diploma School of Music, ISEBIAMA is a sensational singer, songwriter, guitarist whose love and passion for music has taken him through phases most focused and accomplished musicians pass through. From the basic music foundation, to sight reading & writing his music, to understanding the connection that should exist between different instruments and performers in small ensembles, group performances and chamber groups. Isebiama is indeed a musician of purpose; his genre of music is deeply rooted with originality and cultural credibility in Soul and World Music. Though born and bred in Lagos, Isebiama hails from Okrika in Rivers State. His songs which are written & delivered in English, Yoruba, Okrika and Pidgin English, are an expression of his experiences and the stuff that goes on in his heart.  His dynamic play of the guitar with speed, passion, mental strength, balance and panache, and his remarkable vocal intonation through his mid to high notes registration are assets to be reckoned with. ISEBIAMA is the new sound of music.

EFE PAUL: Widely regarded as one of Nigeria’s leading Spoken Word Poets, Efe Paul has been a headline performer in many of the nation’s premier performance poetry venues, including Anthill 2.0 and Taruwa. For over a decade, Efe has continued to deliver Spoken Word Poetry locally and internationally, gracing platforms at seminars, workshops, conferences, tertiary institutions, community development fora, as well as churches. He is the voice of a generation, a seeker and speaker of truth, an entertaining poet and performer.

There promises to be:
* A one-on-one interaction between authors and readers
* A platform for book enthusiasts to meet, interact and network. (Members of PulpFactionClub on Facebook and followers on Twitter would have a grand opportunity to meet).
* Freebies, lots of it. Let’s start with this. Invite four of your friends, ensure they come for the event and win a free book.
* Live Musical performances by:  guitar masters Ese Peters, Isebiama, and
Spoken word performance by One of Nigeria’s best, Efe Paul.
* Book signing and Book Bazaar.

Remember: Bring four friends and win a free book! Gifts are available for early birds too
www.nodsms.com
www.wordsmithymedia.com
www.pulpfaction.org.ng
http://www.debonairbookstore.com
Posted by The Bookaholic at 11:45 AM