Today is the World Environment Day. Climate of Change is a new play that captures the issues around environmental issues in Nigeria. 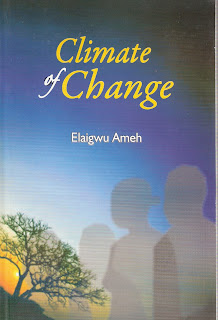 Climate of Change is a snapshot of rural dwellers’ struggle for survival and integral development in a climate-constrained world. The play demystifies climate change by situating it within the existential realities of our society. Bagada, the setting of this play, is fraught with problems of diseases, hunger and conflict, arising from the impacts of climate change on livelihoods, while the political class feed fat on the ignorance and weakness of the people through corruption and high-handedness.

The play also underscores some of the injustices women face in our society today. But, rather than simply lament the plight of women by portraying them as mere passive victims, the play shows that women are also effective change agents and repositories of valuable knowledge that could engender societal development. By painting a picture of the vulnerabilities of women in our society, this play does not aim to reinforce binary oppositions between men and women, but rather seeks to accentuate the symbiotic relationship that should exist between both sexes—a relationship that has our shared humanity as its common denominator.

A drama of despair and hope, of death and life, Climate of Change advocates change if the ills of society are to be addressed. Change is thus a telling metaphor on the environmental issue of climate change as well as a proactive medium for transforming society. In effect, since the physical climate is changing, the mental climate of the people must also change.

Elaigwu Ameh is a creative writer, social analyst and development communicator.  In July 2005, he won the Arrupe College Book Prize for graduating with a First Class BA (Hons) Degree in Philosophy from the University of Zimbabwe. He is now in line for his MA in Development Communication at Ahmadu Bello University, Zaria. After working as a journalist and information officer for some organisations, he now serves as the Coordinator of Theatre for Concerted Change, a non-profit organisation geared towards enhancing grassroots development through participatory communication and development-oriented theatre. His publications include poems, short stories, social commentaries and academic essays. His short story, "Vagina Protest," won the 2010 Centre for Human Development/Ford Foundation Writing Competition (prose category). Climate of Change is his first play.

Posted by The Bookaholic at 8:47 AM