There are so many events this week. Let's start with Infusion this Thursday. 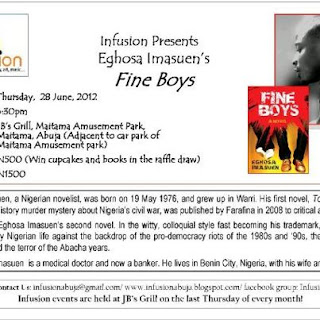 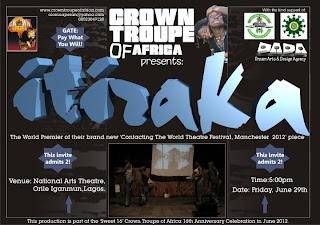 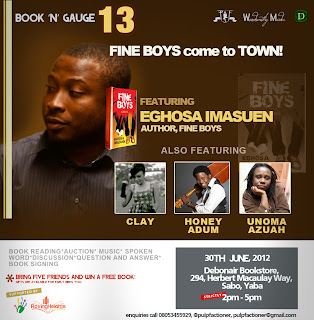 This month, we would be featuring Eghosa Imasuen, author of Fine Boys and Unoma Azuah author of Edible Bones.

Imasuen was born on 19 May 1976. He is a medical doctor and lives in Warri, in Nigeria’s Delta State. His short fiction is published online magazines like blackbiro.com and thenewgong.com. His first novel, To Saint Patrick, an alternate History story was published by Farafina. His latest work Fine Boys has been warmly received in literary circles. Eghosa would be discussing his latest work.

Unoma N. Azuah teaches Composition and Creative Writing at Lane College, Jackson, Tennessee. She is an MFA graduate of Virginia Commonwealth University, Richmond, Virginia, and has an MA in English from Cleveland State University, Cleveland, Ohio, both in the US. Her undergraduate degree in English is from the University of Nigeria, Nsukka. She has received a number of awards for her writings, which include the Hellman/Hammett award and the Leonard Trawick award.

Her latest work, a novel, Edible Bones has been warmly received in literary circles. It follows Kaitochukwu’s journey as an undocumented African immigrant in an unwelcoming American urban square, chronicling the distance between his grand expectations and his ensuing formidable fate. The need for a speedy decision becomes the one tough battle Kaito has to face when he finally visits how home country, Nigeria.

Performers
CLAY (Bianca okorocha) is a Pop/Rock singer and songwriter from Imo state based in Lagos, Nigeria. In addition to writing all of her own music, Clay has written for other artists. Starting in 2011, Clay released her first official single, entitled: “Ogadisinma,” under the indie label “FLAMING MEDIA”.

Honey Adum is a Benue born multiinstrumentalist, songwriter, composer and singer. He plays a blend of soul, reggae and highlife. He was a top five finalist at the recently concluded Nigerian Idol Season 2.

Auction Session: There will be an auction session. What do you get? Latest books that you can only find online. Hot CDs that are yet to be on the streets. There is also a surprise X auction item, come to find out. What are you waiting for? Let the bargaining begin.
Also:

The iREP Monthly Documentary Film Screening
This comes up this Saturday, 30th of June, at the Nigerian Film Corporation, Ikoyi, by 2pm prompt, and this time, we bring you THE BIG SELLOUT. You can't afford to miss this. 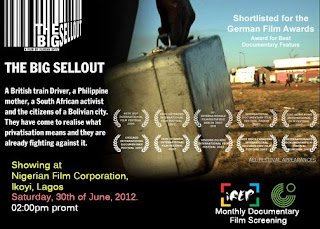 Abuja Writers Forum
The dynamic duo of award-winning journalist and activist Chido Onumah and debutant novelist Richard Ali, will be the featured writers in the June 30 edition of the Guest Writer Session, an initiative of the Abuja Writers’ Forum(AWF), which holds at Hamdala Plaza, Plot 23, Jimmy Carter Street, off Protea Hotel, Asokoro, Abuja.

The Guest Writer Session which started in June 2008 is generally regarded as the most consistent literary event in the country and has become the template for similar interventions, has this year already featured an interesting mix of writers including Uche Ezechukwu, Steve Okecha, Oyibo Ameh, K K Iloduba, Betty Abah and Abubakar Adam Ibrahim.

Chido Onumah, whose latest book is Time to Reclaim Nigeria (Essays 2001-2011), has worked as a journalist in Nigeria, Ghana, Canada, and India. He has been involved for more than a decade in media training for professional journalists as well as promoting media and information literacy in Africa. He is currently coordinator of the African Centre for Media & Information Literacy (AFRICMIL), Abuja, Nigeria. AFRICMIL is a pan-African centre dedicated to a new vision of media and information literacy as a key component in the education of young people in Africa. From 2002 to 2004, Onumah worked as Director of Africa programmes, Panos Institute, Washington, DC, U.S.A., helping journalists in West Africa, as well as the Caribbean, report in depth on issues that are frequently underreported or misreported — issues such as HIV/AIDS, environmental degradation, and ethnic and religious conflicts.

Richard Ali, whose debut novel, City of Memories, was published in May 2012 by Black Palms Publishers and has received generally warm reviews, hails from Idah in central Nigeria andwas born in Kano into the family of Mr. Adejo Ukwubile Ali, a Chartered Accountant, and his wife, Ajuma [nee Ocholi], a Grade II teacher, in the early 80’s.

The June 30, 2012 edition of the Guest Writer Session starts at 4pm and will include the usual side attractions of poetry performance, mini art exhibition, and a raffle-draw as well as live music. The Abuja Writer’s Forum meets three Sundays each month and hosts a reading on every last Saturday at the International Institute of Journalism, Hamdala Plaza, Jimmy Carter Street, Asokoro, Abuja.
Posted by The Bookaholic at 1:34 AM