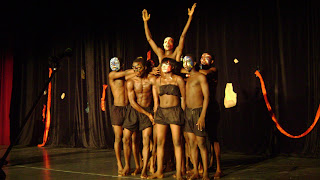 Yes, I watched a Nigerian play recently. The venue was National Theatre; the host, Crown Troupe and the play, Ahmed Yerima's The Fall of A King.

There was a poetry performance of 'Ajani', a passionate love poem from Jumoke Verissimo's new anthology I am Memory by the troupe. There was Fulani dance by some children which made me know that there is hope for the arts sector in Nigeria. There was also a maiden dance that focused on the upliftment of the traditional African values. And guess what? That was just the appetizer.

Now to the main dish, the performance was captivating. The play was very well acted: a blend of traditional dance and contemporary Nigerian dance (Alanta, yahooze, for those that know them!)the use of pidgin English, chants, songs, masks and tatoos. The play itself was a political satire about the love of power and the things humans do for power. The setting was the animal kingdom at a time when animals were living in peace without any leader, then, there was an hunter who missed his way and taught the animals how to have a ruler through democracy. The crux of the play focused on the gamble for the throne by the Elephant, Lion and Tortoise. The in-between is why you will get hold of the book and read or pray that Crown Troupe performs the play again...One more thing, Tortoise Inauguration Speech was an adaptation of Obama's Inauguration speech, that was really it for me...he was giving his speech punctured by fast paced music that as I remember was 'Oya Tortoise quote Obama', that was very hilarious... 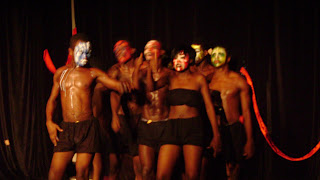 A very well told and dramatised play with allusions to past dictators in Nigeria (Abacha, Babangida) and a warning to politicians in general: the people put you there, they are the ones you should serve. And the use of animals, maybe we are all animals in a way, particularly when we let the animal instincts in us rise, when we let the 'dog' in us eat another 'dog' in the chase for a 'bone' called power.

There was also the dessert: a dance by Nefertiti, a traditional dance troupe. What else could I ask for to make my week lovely?

It was however pathetic that the audience was not big enough for that kind of presentation, we were not up to fifty in the hall. Imagine! 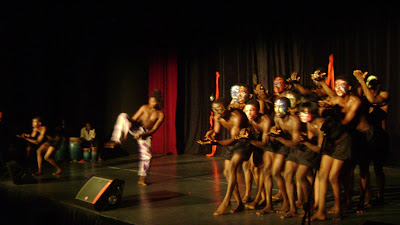 NB: Crown Troupe presents plays at the National Theatre every month. The next production is on March 1, 2009 with Ayo Arigbabu's adaptation of Moremi.

Ebuntemi
Posted by The Bookaholic at 9:36 AM