A DAY TO MAKE THEM READ IN KADUNA 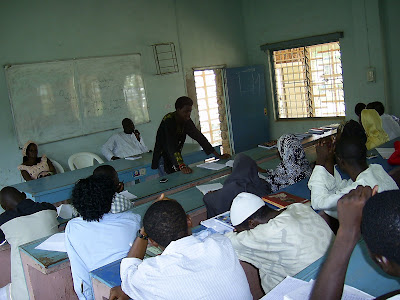 THAT THEY MAY READ...
Reading has suddenly become unfashionable and the seeming financial reward and fame in comparison to the glamour burden entertainment industry is helping to make it less fashionable! This realization and preempted future consequences prompted the Editorial Board Community Development Club of the National Youth Service Corps Scheme, Kaduna State to organize a reading campaign aimed at reversing the downslide in reading among young people.

The Editorial Board is a Community Development Group registered within the ambits of what the NYSC represents. Over the years, the Editorial Board with the help of corporate bodies and general public, has continually been at the forefront of Community Development through innovative projects and selfless service.
To further add value to the event which held on the 3rd of June, 2009, Onyeka Nwelue, author of The Abyssinian Boy was around. The event was in two stages: the first at Command Secondary School, Sabo, Kaduna South and the second at the Faculty of Arts, Kaduna State University. The author, at these events, read from his book, interacted with the audience and also presented a paper titled - Regenerating the polemics of reading culture in Nigeria at the university.
Onyeka Nwelue was born in 1988. He won the Thompson short stories competition when he was eleven. In 2004, he was described in the Guardian Newspaper as the ‘teenager with the steaming pen’. He received a grant from the Institute for Research on African Women, Children and Culture (IRAWCC) in 2008 and has been selected as Writer-in -Residence for the month of July by the Centre for Contemporary Art (CCA), Lagos. His debut The Abyssinian Boy was published this year and is being made into a movie by Danish film maker Lasse Lau together with Nigeria’s Tunde Kelani.
At the Command Secondary school venue of the literary and current affairs quiz competition, seven schools competed. The competition saw Queen Amina College emerge 1st , Royal International college was 1st runners up and Christ ambassador’s college was 2nd runners up. Other schools that participated are Oxford International School; Government Secondary School, Kakuri; Danbo International College; Command Secondary School, Sabo and Rimi College, Ungwarimi, who had their students come as observers. Questions for the literary segment was pulled from The Last Duty by Isidore Okpewho, The Joys of Motherhood by Buchi Emecheta, Sizwe Bansi is Dead by Athol Fugard, On His Blindness (Poetry) by John Milton and contemporary Yellow Yellow by Kaine Agary.

The Kaduna State Library Board was at the event represented by Alhaji IbrahimBuba.The Dean of Students’ Affairs, Mr. Audee T. Giwa was at hand to join cause with the Editorial club team. Also apresent was Mrs. Ogwuche Victoria, the staff adviser of the editorial board who challenged the ladies to pick up reading as a pastime and also encourage their siblings to do same.
At the university, Onyeka presenting his paper submitted ‘I could be weird at times. Once in my university, a lecturer had asked us, the students, to Google up a topic, copy, paste it on MS Word, print, write our names on them and pass for assignment. (Hilarious, isn't it?) I was instantly taken aback. But what can one do in such a lousy situation? The truth is that we can only save Nigeria through extensive research.’
Posted by The Bookaholic at 6:05 AM