Bookaholic With Bella: Who are these gods? by Vincent Ikedinachi 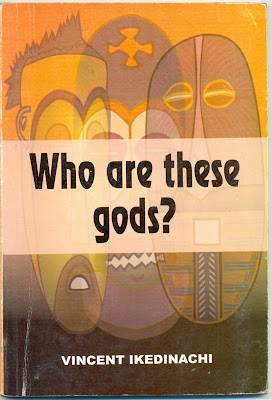 Who are these gods?

The sudden death of Oba Irobosa could show that the gods were angry; but a controversial Oba was later enthroned. Oba Eloho was a wolf under a sheep skin. Tactically, he went on eliminating everybody opposing his reign as Oba, using the gods as his weapon. Eloho must not remain the Oba since the wrath of the gods was as vivid as the rising sun on Ababi. But how could that come to be since one Oba must die before another can be crowned? Could the angry elders oppose the gods and rebel to dethrone the Oba? Who could the people support, since the gods direct the Oba’s decisions? Who are these gods?

Vincent Okechukwu Precious Ikedinachi is a 2005 graduate of Geology and Applied Geophysics, Obafemi Awolowo University, Ile-Ife, Nigeria.
Posted by The Bookaholic at 9:27 PM

Labels: Bookaholic with Bella, Vincent Ikedinachi, Who are these gods?