Exploring the World of Zahrah... 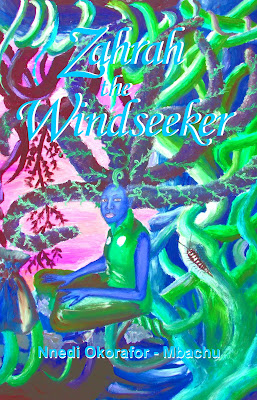 Zahrah the Windseeker is not only an eponymous story of Zahrah Tsami, the protagonist of the story; it is a book of adventures, possibilities, and unknown realities. The novel beckons us all: young and old into a world where all things are possible, a world without borders, free from the restrictions that our reality places on us. Zahrah was born a ‘dada’ a child with dreadlocks with green vines woven into it. This implies that she has supernatural powers that she did not get to know until she was thirteen, after her first menstruation. Initially her uniqueness was a burden that separated her and made her the clown of the class.

The world of Zahrah is a world with a magical stint. A world of CPU seeds, digibooks, netevisions, talking compasses, hydrogen and flora-powered cars, leaf-clipping and mending beetles, to mention a few. It is a world that connects the present with the distant past and the unknown future; a world of in-betweenness’.

Now to the story: Zahrah and Dari are friends; Dari continues to search for knowledge, he believes that there is more to the world than Ooni kingdom. This passion for the unknown fuels his drive for adventure as he visits the Dark Market (a mythical world of evil) which is not entirely true.The Dark Market is the beginning of their exploration into the world of the unknown. They meet Nsibidi, another windseeker there. Their thirst for knowledge leads them into the Forbidden Green Jungle. A jungle on the outskirts of the village, an entirely different civilization shrouded by myths of evil, intended to stop people from discovering it. On one of their journeys to the jungle, Dari is bitten by a war snake; the effect: a coma; the cure: an unfertilized elgort egg. What is an elgort? According to the Forbidden Greeny Jungle Guide: it is a nasty beast, the most deadly in the Greeny Jungle, the Ultimate killing machine.

Zahrah takes a noble decision, to save her friend and get an unfertilized elgort egg. This is the crux of the story. She encounters beasts: the whip scorpion, a giant tortoise, a talking frog, bush cows, gorillas, with great civilization, the carnigourd, talking panther and finally the elgort.

This book has been tagged different names: magical realism, science fiction, mythical story. For me, it is the story of a girl on a noble course to find a cure for her friend’s sickness, and while on that journey she discovers her real self, situations bring out her real self. She finds out that contentment with the present reality is not sufficient, only when you explore will you discover the real you.

Posted by The Bookaholic at 9:44 AM