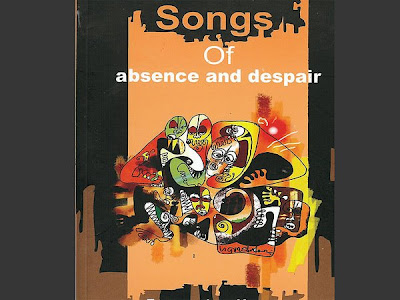 You have a right to know that in our bid to spread the word of literature to the world, we are now official arts bloggers on BellaNaija. Here is an extract of a review of Toni Kan's Songs of Absence and Despair:

Toni Kan’s collection of poetry Songs of Absence and Despair, are not songs to dance to, but songs tinted with darkness even as they focus on the theme of absence and emptiness. These two themes are hard to write about because they are deep-seated emotions that everyone hates but cannot avoid in life. Yet, the poet in Kan does justice to them.

They are short but provocative poems divided into two sections: Songs of absence (with nineteen poems) and songs of despair (with fifteen poems). They are very contemporary taking a look at the effects of changes caused by the ‘contemporariness’ of our world: loneliness, separation of spouses to search for a better living, migration, nostalgia, lost love, death, foster parents, ‘lost’ children, etc.

Toni Kan is a poet with a trick; he writes as if with a quill, uses the ink of language minimally with caution lest he defaces the focus of the work. Thus, each word that spills from his pen is pregnant with meaning. He spices his language with the use of literary devices that are spread in different parts of his work: personification, simile, metaphor among others. This does not mean that the language is not accessible. The shortest poem is one to look at (‘I Read Your Body like Braille’): In pitch darkness/ I read your body like Braille/ My fingers are my eyes. (p.54)

A literal explanation of this is a sexual rendezvous between two people…but that’s just limiting the power of the poem. It could mean many things to other readers. For me: it is the feelings of absence that one feels when a lover is away, ‘my fingers’, memories that I have of you are the ones that make me see, that give me temporary comfort.

Read the rest on BellaNaija...
Posted by The Bookaholic at 8:03 AM